Taking place November 5 through November 6, the Breeders’ Cup World Championships returns to celebrate its 38th run in Del Mar, California. The Swiss watchmaking brand,  Longines, will once again serve as the Official Partner, Official Timekeeper and Official Watch of the horse racing competition. The event continues to be recognized as one of world’s most exciting gatherings of sport’s greatest horses, jockeys, trainers, owners and breeders, and this year will be held in-person with plans to follow safety precautions and health guidelines. 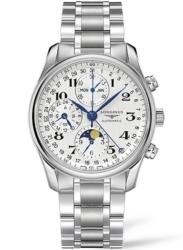 During the event, Longines will also host the Longines Prize for Elegance fashion contest, encouraging guests to showcase their best race day attire in keeping with the brand’s motto, ‘Elegance is an Attitude’. One male and one female winner will be selected to receive Longines timepieces each day.

The Official Watch of the event will be The Longines Master Collection, a stunning moon phase watch featuring a silver “barleycorn” dial in a stainless steel case and bracelet. All fitted with self-winding movements, the various models in this collection offer many special features and bring together the classical elegance and excellent quality which never cease to delight those who appreciate exceptional timepieces.

About The Breeders’ Cup

Based in Saint-Imier in Switzerland since 1832, the watchmaking company Longines wields expertise steeped in tradition, elegance and performance. With generations of experience as official timekeeper of world championships, and as partner of international sports federations, Longines has built strong and long-lasting relationships in the world of sport over the years. Known for the elegance of its timepieces, Longines is a member of Swatch Group Ltd., the world’s leading watch manufacturer. The Longines brand, with its winged hourglass emblem, is established in over 150 countries.