New Y.A. Book Gallant: The Call of the Trail – an Amazon #1 Best Seller – Brings the Sport of Endurance Riding to Forefront, Tells Tale of Unbreakable Bond Between Human and Horse

Foreward Publicity announces the release of Gallant: The Call of the Trail, written by Claire Eckard, with illustrations by Phylica Mann.  Even before its release, the book has already received the coveted best seller status on Amazon and has hit #1 in several categories. 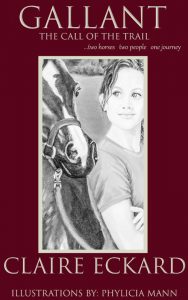 Gallant: The Call of the Trail is a gripping journey of a young girl and a foal who are raised together in The Valley of Hearts Delight. Gallant and Gracie have a special bond, rarely seen between a human and a horse. Separated by a bad accident when Gallant is five, each gets a second chance of happiness pursuing the long-distance sport of endurance riding, neither knowing they are leading parallel lives.  Will Fate bring them together again? Gallant’s arch nemesis, The Almighty Flash, threatens to destroy all that Gallant has worked for. His misguided ambition and greed, developed at the hands of an abusive owner, has created a darkness in his soul that turns to blind fury when his endurance career is threatened.

Gallant: The Call of the Trail was inspired by Eckard’s dear friend — a 97-year-old author of books about endurance riding and one of the first individuals to help create and shape the sport in the U.S.

“I suggested it would be fun to write a fictional book based on some of her early childhood memories and amazing career in the sport of endurance riding,” said Eckard. “I also wanted to highlight one of her exceptional horses, HCC Gazal, who still holds the record for winner of the Haggin Cup awards, which is the most prestigious award in endurance racing.”

Through this imaginative, powerful, and heartwarming story, Eckard wants to introduce readers to what she deems as “one of the most exciting horse sports in the world,” while sending messages about love, relationships, personal growth, and adventure.

“The book establishes the special bond Gracie and Gallant have while growing up until they are tragically separated,” said Eckard. “I also introduce Flash, who is the horse equivalent of a bad guy, but once the reader understands his story, they end up almost rooting for him.”

Eckard is an animal lover and believes in volunteering to give back to her community — especially to the homeless animals that need to find their forever homes. Her animals often inspire her writing, blending reality and fiction to entertain, teach, enlighten, and share the joy animals bring to our lives. Eckard is an author, poet, songwriter, wife, mother, and grandmother. She lives in Arizona, splitting her time between her home in Yuma, Arizona and her ranch in the mountains of Prescott.  Her life is full of four-legged family members – 3 dogs, 11 horses and a miniature mule!  Eckard is also the author of the award-winning Bentley and the Magic Sticks! and GERIBO, The Shelter Cat.

Gallant: The Call of the Trail (ISBN:978-1-6628-2614-6) is published through Mill City Press and is available online with the following retailers: Amazon, Barnes & Noble.