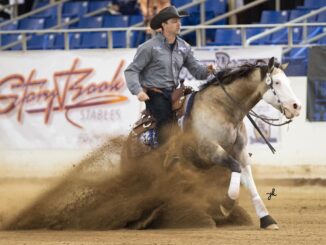 Matt Mills and Martin Muehlstaetter Reach Million Dollar Mark for NRHA The National Reining Horse Association (NRHA) has added two more Million Dollar Riders to their ranks, and Kimes Ranch is proud to endorsee both riders, Martin Muehlstaetter and Matt Mills. The NRHA was founded in 1966 and is dedicated to promoting and growing the reining horse industry worldwide. Matt […]

NRHA to Recognize Mike Carrier with Lifetime Achievement Award OKC CVB head to receive honor from equine sport’s Oklahoma City-based organization Following the presentation of the National Reining Horse Association (NRHA) Hall of Fame Committee’s recommended nominees, the Board of Directors and past Hall of Fame inductees voted to approve the late Sally Brown and the late Jerry Kimmel for […]

NRHA Reinstates 2020 World Championships In a year of unprecedented challenges and seemingly endless unknowns, associations have struggled with difficult choices. Key among them has been making decisions that are best for the most members. The National Reining Horse Association, like other equine organizations, has waded through difficult waters, very aware of the reality that what benefits one member can […]

2020 Southeast Affiliate Regional Championship Moves to Jacksonville Due to a host of uncertainties impacting the event, the Heart of Dixie Reining Horse Association cancelled the Southeast Affiliate Regional Championship Show originally scheduled for August 19–23 in Perry, Georgia. Fortunately, reiners came together to find a solution and a new home for the event. According to HDRHA Board Member Kyndall […]

Entries Strong for First Major Event of the Year. NRHA Following the initial deadline for entries, the National Reining Horse Association (NRHA) Derby Presented by Markel reports entries are on track for a strong event. The preliminary numbers for 2020 are already at 96% of the 2019 Derby. This count does not include any late entries, which must be received in […]

Get Ready to Derby! The National Reining Horse Association (NRHA) Executive Committee and Board are pleased to announce that the 2020 NRHA Derby Presented by Markel looks to be on track to take place at the Oklahoma City at State Fair Park June 13–21. It’s the good news reiners have been looking for after the long hiatus from the show […]

NRHA Board Supports Approved Events Resuming on May 1 The National Reining Horse Association (NRHA) Board of Directors supports resuming NRHA-approved events beginning on May 1, 2020, as long as show producers and exhibitors adhere to local and state regulations surrounding COVID-19 and take measures to assure the safety of all involved. NRHA understands that not all areas of the […]