A key event on the world equestrian calendar, Equita Lyon, the Salon du Cheval de Lyon, and its Longines Equita Lyon Concours Hippique International, will take place from 28 October to 1 November 2020 at Lyon-Eurexpo. Tickets go on sale on Tuesday 26 May. 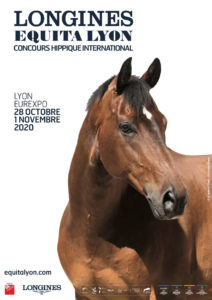 The announcement that the 26th edition of Equita Lyon and its Longines Equita Lyon Concours Hippique International, would be going ahead from 28 October to 1 November, made a splash and restored the hope of an entire sector. The first support measure confirmed: a late-night opening until 10.30pm on Saturday 31 October, to allow visitors to be spread out throughout the day. The second measure also confirmed: all of the prices will be frozen for this 2020 edition, including those for ticketing.

Equestrian sport finally back in France and in Europe!
The Longines Equita Lyon Concours Hippique International marks the return of indoor equestrian sport in France. And the great news: the Longines Equita Lyon Concours Hippique International will continue to play host to four FEI World Cup legs, and is the only event in Europe which can boast of doing so. Indeed, the Rhône-Alpes event offers spectators a Longines FEI Jumping World Cup leg, an FEI Dressage World Cup leg, an FEI Driving World Cup
leg and a leg of the FEI Jumping Ponies’ Trophy, the Pony Jumping World Cup. All the FEI World Cup Dressage and Driving classes and those of the FEI Jumping Ponies’ Trophy are open to everyone, who has an entry ticket to the exhibition. The Longines FEI Jumping World Cup offers beginners the opportunity to familiarise themselves with the key discipline of equestrian sport, with a large majority of the classes open to everyone, and aficionados can attend three highflying events, which all the best riders on the planet dream of adding to their list of wins: the
Longines Grand Prix on 30 October in the evening, the Equita Masters on Saturday 31 October also in the evening and the Longines FEI Jumping World CupTM leg on Sunday 1 November in the afternoon, (specific tickets required for these three events). The “Sport and Show” evenings on Friday 30 and Saturday 31 October will showcase the
world’s best equestrian artists in the Longines Equita Lyon Concours Hippique International arena. After the Longines Grand Prix and the Equita Masters, they will perform a unique artistic creation in the star-studded ring, where spectacular staging reveals the abilities and talent of each of them and always arouses the emotion and admiration of the spectators.

As for Western riding, which Equita Lyon has made one of its hallmarks, the NRHA European Derby will return after a first edition which was very popular in 2018. The reining Derbies, organised in Europe’s main countries, are classes reserved for horses in a certain age category. The Lyon NRHA European Derby is open to horses from four to eight years-old. As always, Equita will play host to all the federal circuits upheld. Spectators in Lyon will be able to watch the French Tour’s jumping classes and the Dress Tour’s dressage classes, the Grand Indoor FFE AC Print jumping leg and the Amateur Gold Tour Esthederm and the National Style and Equitation Finals.

Among the exhibition’s 140,000 m2, on the edge of one of the Lyon-Eurexpo’s eleven arenas created for the occasion, boasting non-stop entertainment from the opening to the closing of the site, and around the many breeders and exhibitors who will meet up their audience again, there is no doubt that all the enthousiasts will find what they are looking for!
INFORMATION AND RESERVATIONS ON WWW.EQUITALYON.COM