Organisers of CHI Royal Windsor Horse Show today announced a stellar line-up of competitors entered for the national classes at this year’s Show, taking place from 1 – 4 July. Over 1,700 entries have been received across the national Showing, Show Jumping and National Driving classes, laying the foundation for an exceptional four days of competition. 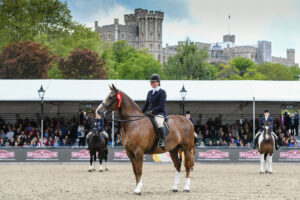 Show Director, Simon Brooks-Ward, commented: “The standard of entries this year demonstrates the popularity of the Show and we are delighted to be able to welcome competitors back to the private grounds of Windsor Castle, albeit slightly later in the year than originally planned. The 2021 edition of Royal Windsor Horse Show is going to be very special and to have such a high calibre of national competition is really exciting.”

Chief Showing Steward, Nigel Hollings, added: “I am amazed at the number of entries in the Showing classes for this year’s Royal Windsor Horse Show. The quality and standard is fantastic and we look forward to welcoming this country’s finest show horses and ponies to this great event. Competitors cannot wait to compete again at their favourite show of the year.”

Her Majesty The Queen heads an outstanding list of entries for this year’s Show, with entries in 22 classes. Amongst the most exciting is the homebred Fools Paradise, already showing great promise in this, his first season. The five-year-old gelding is out of the great mare Stardust, herself ridden to success many times at Royal Windsor by producer Katie Jerram‐Hunnable.

Katie Jerram‐Hunnable will also present Her Majesty The Queen’s homebred ex‐racehorse First Receiver, and hopes are high that he may follow in the footsteps of her illustrious campaigner – and former Royal Windsor Supreme Showing Champion – Barbers Shop.

“This is the best week of the year for me,” says Katie. “It’s my favourite show and always has been – even before I had the pleasure of riding The Queen’s horses. The week brings a lot of pressure, but it’s enjoyable pressure in such a beautiful setting.”

Robert Walker will once again be bringing a strong contingent from his base in Cheshire, having landed the “magic treble” of Open, Novice and Four‐Year‐Old Hunter titles in 2019, the last time the Show was held. He is also bidding for a third successive Ridden Hunter title with the all‐conquering Lightweight, View Point, who was also crowned Supreme Champion in 2018. “Sean”, as he is known at home, has already hit form in 2021 having been crowned Champion at the prestigious North of England Spring Show.

Robert also fields the exciting Windsor debutant Chief Whip in the Middleweight section, as well as the 2019 Heavyweight victor Patrics Choice, who is up against Berkshire-based Jayne Ross’ reigning Horse of the Year Show Supreme Champion Twinshock Warrior.

“As a show, Windsor is one of the highlights of the year, and one that everyone always wants to win,” said Robert. “However, the fact that it’s running at all in this COVID year is a tremendous achievement for everyone involved in running it, and this year’s show will be very, very special.”

Vicky Smith riding Bling Cobsby (pictured) will return to the scene of their 2019 victory in the Lightweight Cob section, but is bound to face stiff competition from Allister Hood with Our Cashel Blue, another former Royal Windsor Horse Show champion.

Britain’s No. 1 and the current World No. 5, Ben Maher will be one to watch as he takes to the Frogmore Arena in the Equitop® GLME Senior Foxhunter on the opening day of the Show. He will face stiff competition from the likes of Ireland’s Shane Breen, Jay Halim riding his recent CSI1* winner Ghost Buster Fortuna HH and Britain’s leading lady rider Laura Renwick, always a crowd favourite on home soil.

Laura returns to the action later in the day when attention turns to the National 1.40m Open Jumping Competition. She will be up against another notoriously quick female rider, Tracy Priest, with the likes of Amy Inglis and Charlotte Platt also hoping to bring it home for the ladies. Experienced competitors Keith Doyle and Mark Armstrong will be piling on the pressure, with some familiar surnames also featuring as the next generation take on the challenge. Graham and Tina Fletcher’s sons Will and Oliver will both be taking part, as will Joseph Stockdale, the son of the late great Tim Stockdale, and Will and Carmen Edwards, whose father is British Olympian Carl Edwards.

Britain’s up-and-coming show jumping stars will once again come to the fore on Sunday 4 July in the Under 25 Jumping. Joseph Stockdale riding Gunner II, the winning combination from 2019, will be looking for a repeat performance. Looking to mount a challenge will be Georgia Tame, returning from a spring campaign in Europe, and Flo Norris riding Gin Chin Van Het Lindenhof, the talented grey gelding formerly ridden to international success by Gier Gulliksen and Bertram Allen.

Lady Louise Mountbatten-Windsor will be flying the flag for the Royal family in the The Champagne Laurent-Perrier Meet of the British Driving Society. The reigning Junior Champion will be up against Charlotte Adams-Lane, who is well known for her fast and furious scurry driving, but will be slowing the pace down to compete her Section B pony, Thistledown Sheer Magic, here.

The Freedman Harness Open Hackney Classes will provide spectators with an opportunity to see horses and ponies which are listed on the Rare Breed Trust endangered list, with fewer than 300 breeding mares remaining. Reuben Cater is always one to watch out for with the highly successful Aghaderg Let’s Up The Antie, winners of the Hackney Open Pony at the Hackney Championships in 2019, as is Luddington My Way from the Ward stables, who has taken the championship slot at many competitions over the past few years, including winning the Open Hackney at Royal Windsor Horse Show in 2018. The Hackney Open Horse will also be a competitive class, especially with the presence of Eclipse Flash Dance and Sir Arie from the Joey Peters and Rachel Moore stables, who will be coming over from the Netherlands and who have already achieved great success both at home and abroad.

The Coaching Marathon is always a sight to behold, and this year will feature Karen Bassett, the most successful driving trials lady driver in the world. Also known for her horse-drawn hearse business, Karen has undertaken several high-profile funerals, including taking King Richard III to his final resting place at Leicester Cathedral on a gun carriage. She will be up against David West, a regular competitor at Royal Windsor, with his recently purchased St David’s road coach.

To find out more about Royal Windsor Horse Show, or to book tickets, visit  www.rwhs.co.uk.

The Show usually takes place in May with an extensive programme of first‐class equestrian competition and performances across five arenas. Her Majesty The Queen has attended every year since the Show started in 1943 and it is the only time of the year that the private grounds of Windsor Castle are open to the public. Royal Windsor Horse Show is organised by Windsor Equestrian Promotions Ltd, as part of HPower Group, also organisers of The London International Horse Show. For further information www.hpower.co.uk.