Grand National now officially cancelled due to the coronavirus

Speculation was rampant coming out of the Cheltenham Festival that April’s Grand National would be postponed or cancelled. Late on Monday, March 16, it was confirmed that the legendary horse race would officially be called off just three days after the final day of the Cheltenham Festival. Although the Grand National 2020 is cancelled, there is still plenty of online horse betting for punters to enjoy around the globe to replace the iconic race.

Many horse racing fans were surprised by the cancellation of the Grand National, which would have been run on April 4. While Great Britain and Ireland were coming to grips with the coronavirus last week, the Cheltenham Festival ran without a hitch. Thousands of spectators descended on Prestbury Park for all four days of the horse race meeting. The turnout for the Cheltenham Festival led many to believe the Grand National would continue as normal.

Organisers of the Grand National had contemplated running the race fixture behind closed doors with punters and fans banned from attending. On Monday, the idea was abandoned due to new concerns and government guidelines.

The Grand National sees a nearly 50,000-person sellout crowd on each of the three days the festival is held. The large number of people would most likely see the infectious disease spread like wildfire among the crowd. According to the BBC over 1,500 people have tested positive for the coronavirus in the United Kingdom. However, that number is merely for those who have been tested. The estimate for those actually carrying the disease is far higher with experts believing between 35,000 and 50,000 individuals have it now. 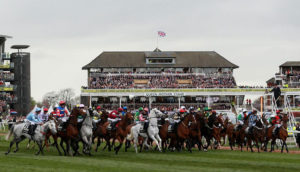 The effects of cancelling the Grand National

The world-famous steeplechase joins a growing list of sports events that have been shelved. All major European football leagues, Six Nations Rugby, and the top sports leagues in the United States and Canada have all suspended play for the time being.

Although it is secondary to the health of the public, the cancellation of the Grand National means two-time winner Tiger Roll will be prevented from running for a third straight win at Aintree. The ramifications of the event’s cancellation could be far greater, however, than the inability for Tiger Roll to win a third consecutive Grand National.

Sportsbooks will be hit hard by the cancellation of the race. The Grand National increases the number of sports events that are now off meaning bookies have nothing to offer punters. It is claimed that half of the UK’s adult population place a bet on the Grand National.

Around £300 million is wagered on the horse race and sportsbooks will now see £0 bet on the April 4 event due to its cancellation. For some sportsbooks, the lack of the Grand National and other sports events will be crippling. Many sports gamblers have moved to online betting over the last 10 years and the lack of money entering sportsbooks this spring could see more brick and mortar bet shops go out of business.

The race’s cancellation, at the moment, means it will not be run later this year. There was a belief it could simply be postponed with a later date set in the summertime. However, as it stands, the Grand National 2020 will not occur.