The win went to German rider Nisse Lüneburg, with Ireland’s Shane Breen finishing in the runner-up spot with the talented Can Ya Makan. Nisse and Shane produced the only clears of the competition, with the German managing to shave a second off Shane’s jump-off time to take the title.

Shane and Can Ya Makan shot into contention in last year’s Al Shira’aa Derby when winning the Bunn Leisure Derby Trial. They went on to finish third in the Derby itself, just picking up four faults at the balustrade fence. Following their superb Hamburg performance, they now look likely to be among the favourites for Hickstead’s iconic class on Sunday 23 June. 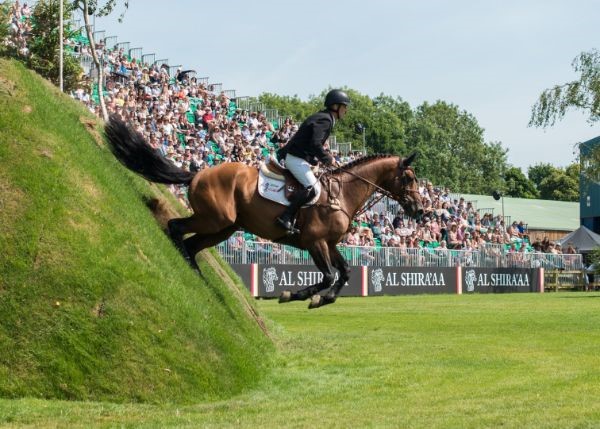 Although Shane has had several top five finishes in the Al Shira’aa Derby, he is yet to lift the trophy. Shane is married to Chloe Breen, daughter of the All England Jumping Course founder Douglas Bunn, and the pair operate a huge showjumping and breeding operation at Hickstead Place – meaning Hickstead is Shane’s ‘home’ show. If he can win the Al Shira’aa Derby, his name will be added to the trophy alongside younger brother Trevor, who had back-to-back wins in the class in 2014 and 2015.

Close behind in sixth place was Nigel Coupe and Golvers Hill. These experienced Derby campaigners won at Hickstead in 2017 and were another to pick up just four faults in Hamburg, proving they’re in good form as the Al Shira’aa Hickstead Derby Meeting grows closer.

Also in the prize money in Hamburg were James Whitaker and Glenavadra Brilliant, who finished ninth with eight faults. The pair were fifth in Hickstead’s equivalent class last year, and the horse was a former winner with James’ elder brother William back in 2016, so this combination are a real force to be reckoned with in this year’s Derby.

A notable absentee in Hamburg was the reigning Al Shira’aa Derby winner William Funnell, who was also in St Gallen representing Britain in the Nations Cup. William will be aiming for a consecutive win on Billy Buckingham, which would put him in the record books as the first five-time winner of the Hickstead Derby.

Tickets for the Al Shira’aa Hickstead Derby Meeting (20-23 June) are on sale now from www.hickstead.co.uk

About Hickstead
The All England Jumping Course at Hickstead in West Sussex was founded in 1960 by Douglas Bunn, who had dreamed of creating a venue that could rival those on the continent. In 2020, Hickstead will celebrate its 60th anniversary. The showground has been the venue for several World and European Showjumping Championships. It now hosts two major international shows each year – the Al Shira’aa Hickstead Derby Meeting (20-23 June) and the Longines FEI Jumping Nations Cup™ of Great Britain at the Longines Royal International Horse Show (23-28 July 2019), plus a national show known as the Science Supplements All England Jumping Championships (29 August – 1 September 2019).

About Al Shira’aa
Al Shira’aa Stables LLC is dedicated to the support and promotion of all horses and equestrian sport. The UAE-based company is dedicated to supporting, developing and promoting all aspects of equestrian sports and horse care, from grassroots levels up to international competition. As well as the title sponsorship of the Hickstead Derby Meeting, Al Shira’aa also sponsors the CDI4*dressage at Royal Windsor; the Elite Foal UK Registration Tour and the Senior and Junior UAE showjumping teams. It organizes the annual CSI4* invitational Al Shira’aa International Horse Show, which is held in the Al Forsan International Sports Resort near Abu Dhabi each January.
The Al Shira’aa Stables LLC’s UAE base comprises a five-star luxury yard which is home to a wide range of horses, from broodmares to youngsters, and from horses who are enjoying their retirement to top-level competition horses, with a particularly keen involvement in showjumping. Their UK base is located in the South East of England and focuses on youngstock and the development of dressage and showjumper competition horses. For more information about Al Shira’aa, visit the website http://www.alshiraastables.com/