The Longines Paris Eiffel Jumping reveals its poster, designed by a New York artist of worldwide renown. JonOne thereby follows Robert Combas, Paola Pivi, Ida Tursicand Wilfried Mille. His work in shimmering colors, halfway between a graffiti and abstract expressionism, will be displayed in Paris as soon as June and throughout the event.

The appointment is given, the Longines Paris Eiffel Jumping, a 5* show jumping competition, will return on 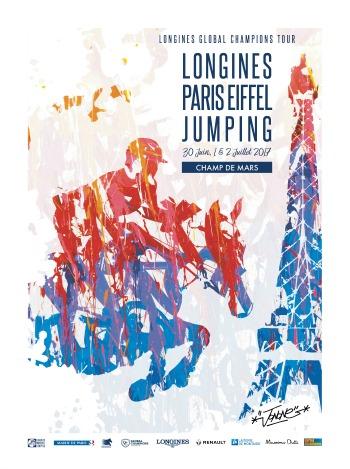 the Champ de Mars between the 30th of June and the 2nd of July, in a sporty, urban and cultural atmosphere. Open to all, this major stage of the international circuit of the Longines Global Champions Tour brings together more than 30, 000 spectators each year at the foot of the Eiffel Tower.

This new artistic collaboration is at the heart of the Longines Paris Eiffel Jumping’s DNA as Virginie Coupérie-Eiffel, President and Founder of the event explains: “It was love at first sight when I first met JonOne in his multicolor workshop. JonOne represents well the open-mindedness of our event. He has a generous personality, is naturally curious, is a contemporary artist who crosses borders, and whose work is visible and accessible to all, from Harlem to Paris.”

JonOne joined the adventure by imagining an original poster painted on canvas.

John Andrew Perello aka JonOne, an American artist of Dominican origin, began by tagging the walls and trains of his childhood neighborhood in Harlem in the 1980s. From tunnels to chair rails, from tag to oil painting, from New York to Paris, his paintings are now sold in the biggest international galleries and offer a Dyonisian enjoyment of the lines, entangled in a labyrinth of visual and tactile explosions.

If he does not consider himself as a committed artist, JonOne concedes that his work has been influenced by the dissenting social events that occurred in his childhood, such as the Black Panthers movement and May 68 in France. He paints standing, sitting, bent and puts his whole body at the service of his art.