SAVE THE DATE:
From 21st to 25th October 2020, « Les 5 Etoiles de Pau » celebrates the 30th anniversary of the event and hosts the FEI Driving World Championship for singles

During the 2020 edition of « Les 5 Etoiles de Pau », sport will obviously have pride of place! The only 5* eventing event in France (CCI5*L) and the FEI Driving World Championship for singles, two competitions much awaited by riders and drivers all over the world, will take place in Pau from 21st to 25th October. 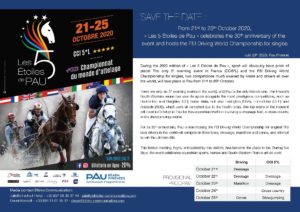 There are only six 5* eventing events in the world, and Pau is the only French one. The France’s South-Western venue has won its spurs alongside the most prestigious competitions, such as Badminton and Burghley (GB) horse trials, but also Lexington (USA), Luhmühlen (GER) and Adelaide (AUS), which were all cancelled due to the health crisis. The top riders of the moment will meet in October in Pau for this equestrian triathlon involving a dressage test, a cross-country and a showjumping course.

For its 30th anniversary, Pau is also hosting the FEI Driving World Championship for singles! The best drivers in the world will compete in three tests, dressage, marathon and cones, and attempt to win the ultimate title.

This festive meeting, highly anticipated by the visitors, has become the place to be. During five days, the event celebrates equestrian sports, horses and South-Western France art de vivre! 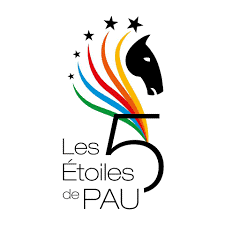