The Eiffel Tower is the Parisian monument which attracts the largest number of tourists each year in France: approximately 7 millions! An attraction that seems to exert also on the riders. Not necessarily in quantity, but surely through quality! Most of the best international riders, monuments of this sport, will be on the Champ de Mars next June 30th to July 2nd for the prestigious Parisian leg of the Longines Global Champions Tour. 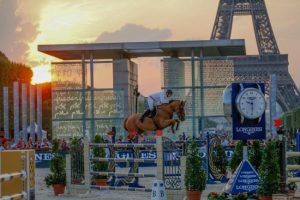 Starting with the most decorated of them, and of all times, Germany Ludger Beerbaum, the man with 21 medals, including 4 Olympic gold, and living legend of this sport. In Paris, Beerbaum will present the one he chose for his succession, young Christian Kukuk. But it’s also another Germanic rider, named Christian Ahlmann, that the public will have eyes on, as he just won the Grand Prix of Saint-Tropez (ahead of Belgium Jérôme Guéry, also in Paris). Others riders from the Mannschaft will be on the Champ de Mars, Daniel Deusser, current world n°2, and Marcus Ehning, the “Centaur”.

“Our” gold medalists
The French crowd will mostly have eyes on ‘its’ Olympic champions of Rio. These four gold medalists, Pénélope Leprévost, Roger-Yves Bost, Kévin Staut and Philippe Rozier will come back to Paris to, potentially, thank this amazing public with a victory in the Grand Prix. Unless this win might be the revenge of one Simon Delestre, with Hermès Ryan, who got back to its great shape before Rio, recently ranking second at the LGCT of Cannes! Spain Sergio Alvarez Moya will also be in Paris, and be careful, Spanish athletes have an habit of shining in the French capital…

In short, 17 riders in the world Top 20 and all European riders of the world Top 10 will be in Paris to compete each day in a flagship event per day: “the Prix Renault ZE – Record de Sau ten Hauteur will be the highlight of Friday with a fence of 2.05m to beat. The LPEJ will host for the first time on the Champ de Mars the Global Champions League, qualifying also for the Grand Prix of Saturday. Then on Sunday, the Massimo Dutti Eiffel Challenge, a Grand Prix with jump-off under the colors of the fashion week. And not to forget the CSI1* with young champions to be, including Pénélope Leprévost and Patrice Delaveau’s daughters, Eden and Valentine, just as our actor-riders Guillaume Canet and Marina Hands”, explains Virginie Coupérie-Eiffel, founder of this unique equestrian event.