Wellington, FL (August 7, 2012) – Dressage rider Rebecca Cohen, who won the 2012 USEF Dressage National Junior Reserve Championship, is looking forward to the future – a future that will commence in New Jersey. Cohen, 16, is relocating to New Jersey to train full time with Lauren Sammis, a member of the United States 2007 Pan Am Team. During the Pan Am Games, held in Rio de Janeiro, Brazil, Sammis won the Individual Silver Medal and helped the U.S. take home the Team Gold Medal.

“Rebecca and I are really excited about her opportunity to train with Lauren. Rebecca worked with Lauren during the National Dressage Championships at Gladstone and really enjoyed it. Now she will have the opportunity to train with Lauren at Hope Greenfield’s 16-Hands Farm just minutes from Gladstone,” said Carol Cohen, Rebecca’s mother. “Two Swans Farm in Wellington is for sale and it is nice for potential buyers to see the farm without the distraction of the horses in training.”

Rebecca’s adventures include a stable of up-and-coming horses, including Curlie V, a very impressive mare by Come Back II out of a Lobster mare, and Sam’t Und Seide, who had been in training with Olympian Steffen Peters for the last year. “Steffen has had Seide schooling the Grand Prix movements for the last year so Lauren will continue her training. I was planning on selling her but decided to keep her for myself. Then Rebecca decided she would like to ride her!” Carol said, with a laugh. “I am pleased that Rebecca will ride her and can’t wait to see what they do together.”

While Rebecca shared that she is eager to continue her dressage career in New Jersey, she was quick to add that she and the horses will be back for the winter dressage circuit, as Lauren trains in Wellington during the winter season. “Rebecca had so much success on the winter dressage circuit in Wellington last year, including earning a 70% in the FEI Junior Individual Test, and she is looking forward to returning to Florida and showing at the Global Dressage Festival and, of course, seeing all of her friends in Florida. We also want to thank Rebecca’s trainers who have helped her get to where she is today, including Ilse Schwarz, Robert Dover, John Zopatti and Steffen Peters,” Carol said, adding that Rebecca is also inspired by John Bryialsen, who co-owns the famous stallion, Come Back II with the Cohens. “While one Come Back II son is currently competing at the Olympics (referring to Calecto V ridden by Tina Konyot) several future champions are developing in Denmark. One thing is certain, Rebecca will never have a shortage of quality horses to ride and compete,” added Carol.

For the time being, Rebecca will continue to compete Downtown, her 17.2 hand Westphalian gelding known as Daddy. The duo not only captured the Reserve Championship title at Gladstone but also took home an impressive top six finish at the 2012 NAJYRC. “Daddy has a heart bigger than most and will go above and beyond what you ask of him. He tries his heart out and I look forward to our future together,” Rebecca said. “Daddy doesn’t like the summer heat in Florida, so I think he will like New Jersey better. He is already there and Curlie and Seide are on their way. Our adventures are just beginning!”

Photo: (L to R) Carol Cohen with Curlie V and Rebecca Cohen with Sam’t Und Seide ready to load and head from Two Swans Farm in Florida to New Jersey where Rebecca will train with Pan Am Gold Medalist Lauren Sammis. (Photo courtesy of Carol Cohen.) 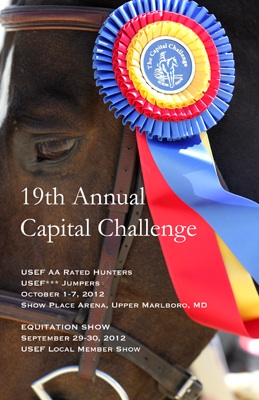 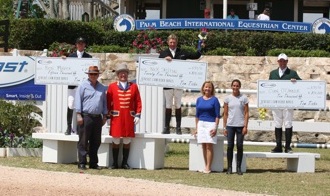 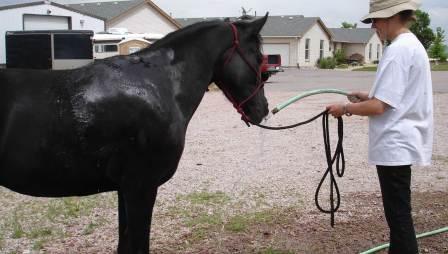 How to Tell if Your Horse is Overheated