The Chisholm Gallery, run by polo enthusiast Jeanne Chisholm, have got their hands on a range of stunning polo bronzes, sculpted by a great American polo player of the early 20th century. Charles Cary Rumsey (1879-1922) was a well renowned artist from Buffalo and upstate New York, best known for his equestrian art. He was also an eight-goal polo player at the Meadow Brook Polo Club in Long Island, who represented the USA in many early internationals. “Pad”, as he was known amongst the polo fraternity, married his two great loves with a series of bronzes, which are now housed in the Chisholm Gallery. Harrison Tweed, John R Fell and Skiddy von Stade, the subjects of the three sculptures, were all players at the Meadow Brook Club during the 1910s. Von Stade, like Rumsey, was an eight-goaler. 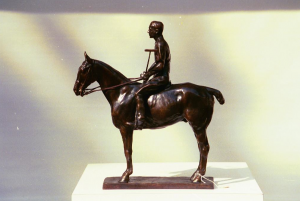 Charles Cary Rumsey is a well known sporting art sculptor from Buffalo, New York. While Rumsey’s life was tragically cut short due to an automobile accident, his work remains to be exhibited both publicly and privately. Rumsey’s work can be found in collections and museums throughout the United States, but can also be seen around the world, but most notably in France, Spain, and Peru. His most famous work Pizarro rests in Trujillo, Spain and exemplifies Rumsey’s knowledge of interaction between horse and rider and was originally created for the Panama-Pacific Exposition of 1915. A cast was later donated to Lima, Peru, which was Pizarro’s burial place. The End of the Trail also known as Dying Indian was in front of the Brooklyn Museum for fifty years, but now rests in the Brooklyn Botanical Gardens. End of the Trail is one of the best known American Indian images to the last four generations in this country and around the world. In addition to Pizarro and End of Trail, some of his most famous public works also include The Bull, located in Smithtown, NY, The Buffalo Hunt, a frieze for the Manhattan Bridge, Victory his World War I Memorial in Zion Park, Brooklyn, Centaur, which stands at the Knox-Albright Art Gallery, Buffalo, New York, and The Three Graces, a large bronze fountain for the terrace of a large manor house “Arden”, built by Averill H. Harriman in New York. 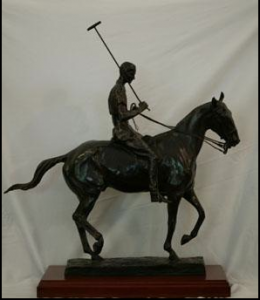 Charles Rumsey is most well known for his equestrian sculpture, but his wildlife and figures are also attributes of his studies in the United States and France under Paul Weyland Bartlett and Auguste Rodin.

Charles Rumsey was a devoted horsemen and high goal polo player with the Meadow Brook Club. Rumsey’s sport was polo. He played on teams with Devereaux Milburn and Thomas Hitchcock, famous players of the time. A fellow poloist of Rumsey’s was Seymour Knox II, another infamous player of Rumsey’s generation. “Pad” as Rumsey was nicknamed, was a member of every U.S. polo team that competed in international cup matches. In 1921, he was classed as an 8- goal man, only two below the highest rating in the modern game. He had an innate knowledge of horses and their movement that was evident in the sculptures he was creating. Charles Rumsey’s life and career were brief, but his sculptural achievements are increasingly valued by the art world. His love of horses, riding, and the game of polo combined with his art education inspire his many animal bronze, especially horse portraits. 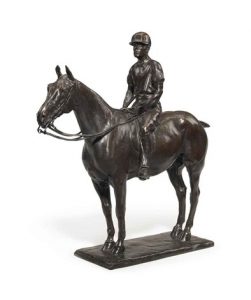 View the Polo Bronze Collection on the link below
http://chisholmgallery.com/rumsey-charles

Skiddy Von Stade was one of Long Island most famous polo players, like Rumsey an 8 goal player with Meadowbrook Polo Club

Harrison Tweed was a polo player and friend of Charles Rumsey, as well as a member of Meadowbrook Polo Club