The sale of tickets for the CHI Royal Windsor Horse Show 2021 will begin at 9am tomorrow. The prestigious annual Show, now in its 78th year, returns to the private grounds of Windsor Castle from 1 – 4 July for four days of world class international equestrian sport.

Tickets for Membership to the Royal Windsor Horse Show Club, which will be limited to 500 members plus their guests, and General Entry tickets will go on sale tomorrow. Organisers will allow up to 4,000 spectator tickets each day – adhering to the Government COVID-19 guidelines set to come into force on 17 May. Should the Government’s roadmap out of lockdown continue as planned, further tickets will be made available after 21 June. 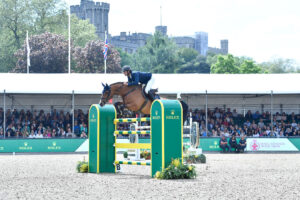 Royal Windsor Horse Show will be the first top class international equestrian event to take place in the UK since the beginning of the first lockdown and organisers believe that demand for tickets will be high. It is the only time of the year Her Majesty The Queen opens the private grounds of Windsor Castle to the public and the Show will feature the world’s leading equestrian athletes across three international disciplines (Show Jumping, Driving and Endurance), spectacular international equestrian displays and a luxury shopping village containing 100 fashion, lifestyle and equestrian boutiques alongside delicious food outlets.

The Show is host to CSI5* Show Jumping, featuring the world’s best riders across four days of national and international competition, with the pinnacle event, the Rolex Grand Prix, taking place on Sunday 4 July. The prestigious competition has an unprecedented total prize fund of over €500,000 and is expected to deliver the highest level of sport, as riders make their final preparations for the Tokyo Olympic Games.

The CAIO4* Land Rover International Driving Grand Prix returns for Horse Teams, adding to the exceptional line-up of competitive action across the four days. As one of the principal Driving events in Great Britain, the competition, which was introduced by the late Duke of Edinburgh, features three stages; Driven Dressage, the Marathon, and Cone Driving, making it the ultimate test of horsemanship and a fantastic spectator sport.

Royal Windsor Endurance, taking place on Friday 2 July, introduces 3* competition for the first time this year to run alongside the 2* and 1*. Competitors will ride tracks running through Windsor Great Park which have a variety of terrains designed to test the riders’ and horses’ expertise.

As the highlight of the national Showing season, Royal Windsor Horse Show will host over 128 Showing classes in 2021. Entries to the Showing classes are already open and filling fast.

In addition to the elite sporting action, ticket holders will enjoy performances from The Musical Ride of the Household Cavalry Mounted Regiment, The Musical Drive of The King’s Troop Royal Horse Artillery, and crowd-favourites, The Land Rover Shetland Pony Grand National and the DAKS Pony Club Mounted Games, with more international acts to be announced in due course.

The 2021 edition of the Show will be carried out in accordance with all COVID-19 guidelines required at that time by the government, local authorities, health authorities and veterinary and equestrian associations. Organisers will be implementing new protocols and facilities to enable a positive experience within this COVID-19 era, with the emphasis being on the safety of competitors and spectators attending.

Show Director, Simon Brooks-Ward, said: “We are delighted that we have been able to reschedule Royal Windsor Horse Show in 2021 and are looking forward to the return of what has become known as one of the best international horse shows in the world. The Show is set to be a spectacle for the whole family, with the highest calibre of competition alongside remarkable entertainment acts.”

To find out more about Royal Windsor Horse Show, or to book tickets, visit  www.rwhs.co.uk.

The Show usually takes place in May with an extensive programme of first‐class equestrian competition and performances across five arenas. Her Majesty The Queen has attended every year since the Show started in 1943 and it is the only time of the year that the private grounds of Windsor Castle are open to the public. Royal Windsor Horse Show is organised by Windsor Equestrian Promotions Ltd, as part of HPower Group, also organisers of The London International Horse Show. For further information www.hpower.co.uk.