“He changed my mental approach to riding and success started coming right away,” says 2020 USEF High A-O Rider Horse of the Year Award winner Catherine Wachtell about coach and trainer, Todd Minikus, and now USHJA Gold Star Emerging Jumper Riders, coaches and their parents will have an exclusive opportunity to benefit from the expertise of this Horseman of the Year, two-time Pan American Games Bronze medalist and winner of more than 100 Grand Prix titles during the USHJA Gold Star Clinic East, January 22-26 at the Jim Brandon Equestrian Center in West Palm Beach, Florida. 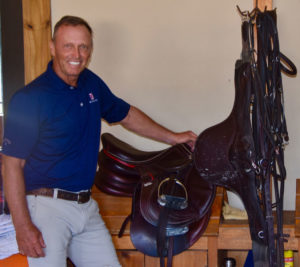 U.S. Hunter Jumper Association (USHJA) Gold Star Clinics are intensive, four-day mounted and un-mounted learning experiences and the pinnacle of the USHJA Emerging Jumper Rider Program, which identifies jumper riders with the skill and desire to excel in the sport while educating them as well-rounded equestrians on their path to excellence.

The 22 East Coast clinic participants that have earned the privilege of learning from Todd Minikus at this prestigious clinic include individual medalists from the USHJA Zone Jumper Team Championships who were recognized as Gold Star Emerging Jumper Riders and invited to attend one of three Gold Star Clinics, as well as a select number who earned Wild Card applications as either a 2019 North American Championship for Children or USHJA Zone Jumper Championships participant,  or competed with a minimum of one clear round as an FEI Children (12-14) rider on a CSIO-CH team or equivalent.

Minikus understands the degree of commitment this clinic’s riders have given to the sport they love. He loves it, too. He grew up next to a stable in West Des Moines, Iowa and watered horses in exchange for lessons.

Minikus says the strength and athleticism of horses drew him to the sport: “They do amazing things. I love getting up every day and riding.”

And for four days in January he will share that love – and his formula for success – with 22 of the rising stars in the jumper world.

After joining the ranks of show jumping professionals in 1980, Minikus made his Grand Prix debut in 1985. Since then he has forged an enviable career highlighted by over 100 Grand Prix wins, five FEI World Cup Show Jumping Finals, six Nations Cup teams, and was named Horseman of the Year by the American Horse Shows Association.