As part of the third Asia Horse Week, under the umbrella of which the Longines Masters of Hong Kong is also
being held, EEM and its Founder and President Christophe Ameeuw are launching the Asian Arabian Horse
Show. Nine purebred Arabians will be presented for the first time to the AsiaWorld-Expo audience. Discover
the breed from Friday, February 14th, to Sunday, February 16th. 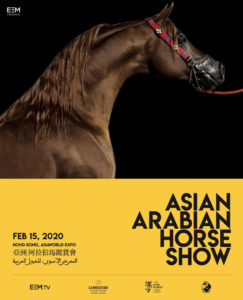 Legend has it that the purebred Arabian is said to have been born from a divine South-wind breeze. One of the oldest and purest breeds in the world, the purebred Arabian is undoubtedly the most admired horse in the world
for its many qualities and abilities. With its proud head held high and nostrils flaring, the freedom-loving Arabian horse undeniably loves the show. For the first time, as part of Asia Horse Week, under the umbrella of which the
Longines Masters of Hong Kong is also held, the AsiaWorld-Expo audience will have the opportunity to discover nine of the breed’s most beautiful specimens at the Asian Arabian Horse Show, an international presentation of types and gaits. For the organization of the Asian Arabian Horse Show, EEM will benefit from the expertise of Christianne Chazel, an organizer of numerous events that promote the breed in France, Europe and the Gulf countries, and in particular, she is an organizer of the World Arabian Horse Championship. Through the Asian Arabian Horse Show, EEM pays homage to the legendary Arabian horse and its breeding, which has only been enhanced throughout the generations. We will celebrate the nobility, courage and innate energy of this Lord of the desert.

With a passion for equestrian sports, Christophe Ameeuw–President and Founder of EEM– created the Ecuries
d’Ecaussinnes in 1997. Based in Belgium, the stables today enjoy an international reputation for trading competition
horses, for high-end breeding, and for an academy that provides access to the best in equestrian training. The
organization, as well as the reinvention of show jumping competitions, is the challenge that Christophe Ameeuw and his team have set for themselves. The company has developed by creating the “Masters” concept, which brings together under one roof the best of show jumping, entertainment and lifestyle experience.

After the successes of the Audi Masters in Brussels and the Gucci Paris Masters, EEM has added to its prestigious profile of events a new iconic competition, one of the most prestigious equestrian events in the world, the Longines Masters series in Paris, Hong Kong and Lausanne. Inspired by the legendary tournaments of the tennis Grand Slam, EEM has created in a single package the “Grand Slam of Indoor Show Jumping”. Recognized by the FEI, this challenge is the ultimate intercontinental challenge, offered to the world’s elite in show jumping with two levels of prizes: the Super Grand Slam, a bonus of 2.25 million Euros for winning 3 consecutive Longines Grand Prix in the same season, and the Grand Slam, a bonus of 1 million Euros for three successive victories in the Longines Grand Prix from one season to the next.

In 2017, EEM created a new iconic competition, the Riders Masters Cup, with Longines as a Founding Partner. Presented in conjunction with the EEF (European Equestrian Federation), this battle will oppose the two world powers show jumping: Europe and the Americas. On the Asian continent, meanwhile, there is the Asia Horse Week, a real meeting point for the international equestrian community in Asia, which was created during the Longines Masters in Hong Kong, thus demonstrating EEM’s desire to develop the international sector in the Asia-Pacific region. In 2019, the Longines Masters enriched the series with a new prestigious stage: Lausanne became the first outdoor stopover in this intercontinental series.
www.eemworld.com / www.longinesmasters.com / www.ridersmasterscup.com / www.asiahorseweek.com