Buena Vista, VA (June 27, 2014)  – World Equestrian Brands (WEB) has long represented some of the best eventers in the world, and now four WEB eventers have just stamped their tickets to the 2014 Alltech FEI World Equestrian Games by putting in impressive performances.  With the help of their Amerigo saddles, Vespucci bridles, EA Mattes pads and Equiliprium products, their riders will take on the best in the world August 21-September 9 in Normandy, France.

World Equestrian Brands team of sponsored riders to make the Land Rover US Eventing Team for the World Equestrian Games are Buck Davidson of Ocala, Florida and Carl and Cassandra Segal’s Ballynoe Castle RM, a 2000 Irish Thoroughbred gelding; Sinead Halpin of Oldwick, New Jersey and Shamwari 4, a 2002 Hanoverian Gelding owned by Shamwari 4 Syndicate LLC; and Kim Severson of Charlottesville, Virginia and her own Fernhill Fearless, a 2000 Irish Sport Horse gelding. And it wasn’t just American World Equestrian Brands riders making the cut; Canadian Hawley Bennett and Gin & Juice, a 2000 Thoroughbred mare owned by herself and Linda Paine, were named as alternates for their country’s team as well.

In addition, Davidson, Halpin and Severson were named to The USEF High Performance Summer and Fall Training Lists under the classificiation of “World Class,” meaning they possess the ability to be competitive anywhere in the world.  Davidson was appointed with Park Trader and Ballynoe Castle RM, while Halpin was named with Manoir de Carneville and Severson with Fernhill Fearless.  All the riders named will participate in training sessions with US Eventing’s Chef d’ Equipe David O’Connor.

With strenuous selection procedures to meet and stiff competition from the best in the nation, these riders have risen above the rest.  “The entire team at World Equestrian Brands would like to congratulate these riders,” said Robin Moore of World Equestrian Brands.  “We work hard to outfit them in the best and most technologically advanced equipment and tack available, and know that they will make us proud in Normandy.”

With the team named and the World Equestrian Games looming ever closer, the Squad members and alternates will now turn their attention to the preparation events to be held at Great Meadow in The Plains, Virigina July 26-27. 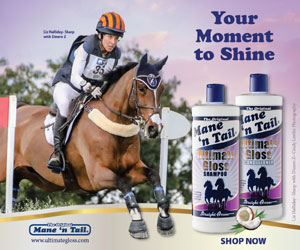