There were only two Welsh breed shows in Western Canada in 2017. From the west coast of British Columbia to the western edge of Manitoba, a distance of over 2000 km, there was our Wild Rose Welsh & Open Pony Show and the Manitoba Annual All Welsh Show.

With immense distances to cover and so few shows in which to participate, the Wild Rose Show offers a three-in-one judging opportunity: the Friday Futurity has one judge and then the main show over Saturday and Sunday is double-judged.

The show also includes a large number of halter and performance classes open to all breeds. About 60 ponies and horses came out to compete for the July 14-16 show in Rimbey, Alberta.

The Young Stock Futurity & Performance Stake took place on the evening of Friday, July 14 with Judge Heather Black of Blackwood Farm in Ontario, who flew almost 3,500 km to officiate. 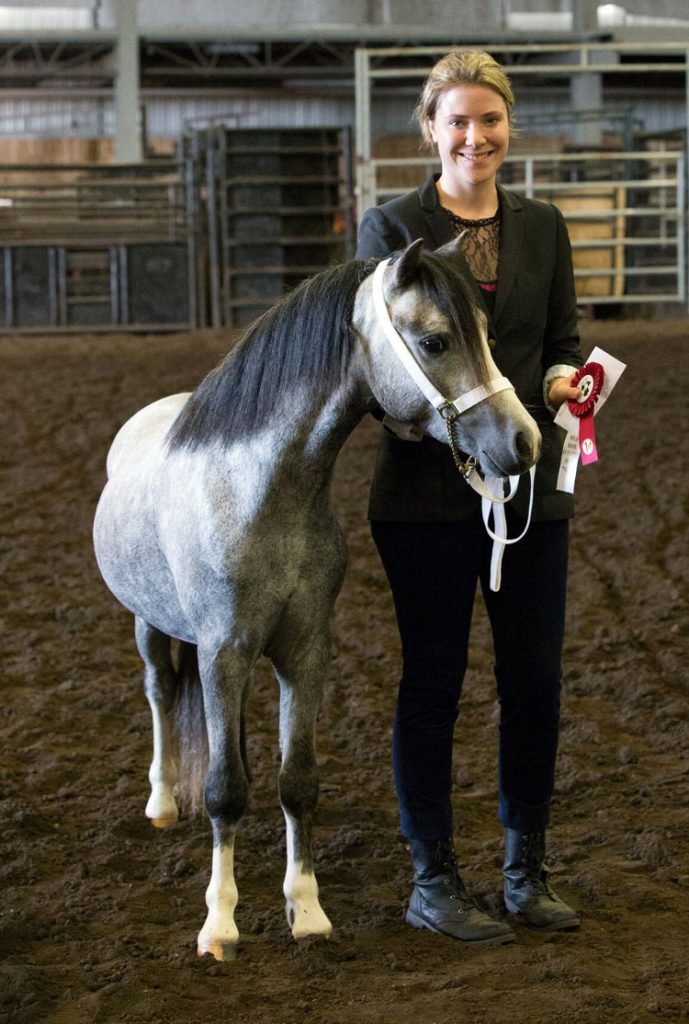 The Futurity Supreme Welsh and Grand Champion Sport Pony was the two-year-old Welsh Mountain Pony colt, Alvesta Infinity (Cat Creek Innuendo x Alvesta Caris by Nerwyn Gwyn). Judge Heather Black said that Infinity had “a lovely head, was well balanced, and had free-flowing movement.” Owner Brenda Podolski recently celebrated 50 years with the Welsh breed, which had started with the purchase of Betws Auryn in 1966. Her daughters, Karen and Christine, help her to continue raising and breeding Section A and B Welsh Ponies in Alberta.

Owner, Kerry, says, “we bred Frezno to ‘Sausage’ hoping to have that prettiness and trainability passed along (because ponies are trained last here, at the end of long days), and V.I.P. is exactly the result we were hoping for. My business and reputation relies on happy return clients that can have results in the show ring, and we think these ponies add to that patina and reputation.”

Heather also said, “The show featured lovely ponies overall, and the owners should be proud of what they are producing.”

Moving onto the main show on Saturday and Sunday, this was officiated by Patricia Cochran of Lochinvar Welsh in Oregon and Hilary Tolhurst of Cwmfelen Welsh in Ontario.

Patricia’s Reserve Supreme went to another young Welsh Mountain Pony, Kasandra Miller’s colt Sunburst Heart of Jubilee (Sunwillow Jubilee x Young’s Heart Breaker by Young’s Country Rock). He’s featured below as Hilary Tolhurst’s Supreme Champion, but it should be noted here that although this is one of the first foals 19-year-old Kasandra has bred, she has been around Welsh throughout her life, being daughter to Shelley Snyder—who has been with Welsh since she was around Kasandra’s age, working for Stan Young’s breeding program until she began her own, based on his bloodlines.

Grand Champion Sport Pony went to Nancy Haverstock’s 15-year-old Half-Welsh mare, Berrylyn Alexi, who also won her Half-Welsh class under both judges. Sired by Welsh Section B Alvesta Folklore and out of an Arabian mare, Alexi is a striking bay that has had great success at this show in the past as well and also competes with her young rider in the under saddle classes. Patricia says, “My Half-Welsh was a very attractive mare with an athletic build, a kind eye, excellent hip, and depth. She was wonderfully turned out and looked every bit the part of a champion.”

Patricia’s Champion Welsh Gelding was also Hilary’s Reserve: Section B yearling, Alvesta Sedona (Llanarth Tarquin x Alvesta Fairy Lustre by CadlanValley Pirate). Of her champion, Patricia says, “A lovely young gelding that exuded presence and an animated way of going. I especially liked his clean shoulder, kind eye, length of rein, hip, and good legs. I think he will make a very useful performance animal.” Alvesta Farm imported Sedona’s sire from England nine years ago when he was a weanling, and Sedona—as well as Alvesta Sakari, also exhibited at the show—are from the last Tarquin crop at Alvesta Farm before a new stallion was brought in for his daughters: Thistledown Arctic Lore.

Stacey Schaber’s ten-year-old Welsh Mountain Pony gelding, Menai Step-On (Knolton Daylight x Menai Slip-On by Friars Generous), was Patricia’s Reserve Gelding Champion and later that day debuted in the driving classes, becoming her Pleasure Driving Champion. An avid driver herself, Patricia says, “I would love to take the reins and drive that pony! He has a huge motor and really powers off his rear end. This is a fellow who takes to his task with a fabulous work ethic and a huge heart. I liked how balanced he is and is generally in an excellent frame.”

Stacey says, “Step-On and his daughter Jubilee are true ambassadors for the Welsh Mountain Pony. They are both a testament to the versatility of the breed in both riding and driving. They showed their amazing temperaments at the Wild Rose Show, as it was Jubilee’s first show under saddle and Step-On’s first show in harness. They truly show how this breed can be used and loved by both children and adults.” Stacey has become ever-more active in the Welsh community, and this year she registered her prefix, SilverViewS Welsh.

As mentioned, Kasandra’s two-year-old colt, Sunburst Heart of Jubilee, had a successful Saturday showing under both judges, with Hilary Tolhurst awarding him Supreme Champion Welsh and Res. Grand Champion Sport Pony. Hilary says, “My choice for Supreme Champion was a very nicely put together pony with a good topline, substance, movement, and with the presence of a true Welsh Mountain Pony. He was also my choice for sport pony—with a pony like this you have the basis of your sport pony breeding and competition, having bone, movement, and quality to either produce quality or to compete himself.”

Kasandra’s extremely proud of how her colt did at the show, and moreover, to be able to start her own breeding line with him. She and her mom plan to start breeding with him next year. “He has a great disposition and is always willing to learn,” says Kasandra.

Under Hilary, 11-year-old Pajon’s Royal Illusion (Kenwood’s Royal Charter x Pajon’s Fanastia by Rosedale El-Senor) went to the top of the Welsh and Sport Pony classes, as Reserve Supreme Champion Welsh and Grand Champion Sport Pony. Hilary says he is “a really good example of a Section B. He had enough substance without being course, with a nice short coupled back, good limbs and feet, length of rein, and gave an overall nice picture.”

Owner Donna O’Neil says, “Illusion will be my forever all-terrain driving pony. He will remain a standing stallion, until any grandchildren appear on the scene. If that turns out to be the case, he will be gelded while we will retain frozen semen. His job will be to pack grandchildren through local hunter/jumper circuits. He has a nearly complete hunter/jumper education, in addition to driving.”

Kerry Marit’s Coyote Run Frezno (Anderin’s Caerwynne x Young’s Golden Fascination by Liseter Star Design) was peppered throughout the show—this six-year-old, mannerly stallion successfully competed in the halter, ridden, and driven classes. Hilary awarded him and Kerry the Pleasure Driving Championship, and says “he warmed up into his job nicely and gave us a good performance, showing nice movement and manners. He’s a nice useful type of Section A.”

About her stallion, Kerry says, “Frezno isn’t a typical stallion, in that he lives with the gelding Emery, his best friend; many don’t realize he’s a stallion. I bought him practically on the spot from Brian Donegan—we bought all the fun, beautiful ponies from his breeding program because they typified all we were wanting in our pastime ponies. Our ponies are the fun thing we do at our show barn. They have to have exceptional temperaments to be around the myriad of kids, dogs, donkeys, pigs, grandparents, bikes, cars, and anything else you can think of. All the ponies are picked because they have that personality combined with good confirmation and frankly they are the dream pony we wished we had as kids.”

Hilary Tolhurst’s overall Gelding Champion was Rosegarland Royal Troubadour (*Eyarth Eragon x Alvesta Indira by *Rosedale El-Senor). The last time he was at the Wild Rose Show was three years ago when, as a foal, Troubadour took the Wild Rose Show’s Futurity Supreme Champion under judge Jeffrey Kohler. Hilary says Troubadour is “a nice, free-moving quality gelding, whom I think will make a lovely performance pony”.

Owner Tiffanie Hutnan says, “Trooper is a typey pony with a large eye and kind temperament. He has had professional handling and has been started with ground work on driving and has been free jumped, showing excellent form. He will excel in harness or under saddle as a hunter pony.”

Both judges awarded Marsh Haven Fiona the Model Hunter Pony Grand Championship. Patricia says, “An easy pick as my Model Hunter pony was a lovely chestnut mare with great proportions of hip-to-chest-to-height. Her good feet, solid pasterns, and short back helped take her to the top of the class.” While Hilary says Fiona is “a quality large pony who has the substance, conformation, and scope for a performance pony, which she went on to show us later in the day.”

The Wild Rose Show is the annual opportunity for Welsh enthusiasts to come together—some have met up at the show for decades, while there are others who arrive for a season or two. However, in recent years, there have been a number of newer breeders who keep showing up with a trailer full of ponies… and so our “long-term” community in Western Canada grows.

To see pictures of all our 2017 champions and to read our full show report, which details each of our champions and reserves, visit our website: www.piperp13.wixsite.com/wildroseshow