The Best Riders in the World Will Challenge Paris’ Iron Lady!
For riders around the world it is a dream to compete in the arena at the foot of Paris’ most emblematic structure: the Eiffel Tower. The “Iron Lady” is one of the top-five most visited monuments in the world by tourists, but it’s only the ”crème de la crème” of equestrian athletes who will jump at the prestigious site. The Longines Paris Eiffel Jumping is the setting of the Longines Global Champions League and the Global Champions Tour, and in 2019 it will bring together some 50 riders from 19 countries on July 5th to the 7th. 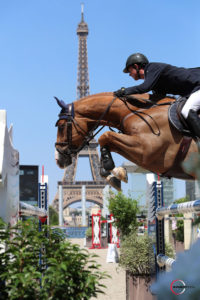 French riders will be in top form competing with the support of their home crowd. On the Champ de Mars, the Longines Paris Eiffel Jumping will feature the the 2016 Rio Olympic gold medal team of Kevin Staut, Roger-Yves Bost, Pénélope Leprévost and Philippe Rozier. Also named in the start list for the French flag is Julien Epaillard, winner of the 2017 Longines Global Champions Tour Grand Prix of Paris, Simon Delestre and Olivier Robert. Also included is young Edward Levy who is steadily climbing the world rankings list, and Sadri Fegaier, who always brings his best at the top level.

The rest of Europe will also be beautifully represented on the Paris stage. The Belgians have a strong lineup, including two riders sitting in the top-five of the Longines Global Champions Tour 2019 rankings. Pieter Devos, winner of the Miami leg, is in second position while Niels Bruynsells, who clinched the victory in Cannes, now in fifth place. Accompanying them are Olivier Philippaerts, Céline Schoonbroodt and Cindy Van Der Straten. The Dutch have two 2012 London Olympic silver medallists, Mark Houtzager and Maikel Van Der Vleuten. The current circuit leader, Daniel Deusser, is the German’s gem, while from the other side of the English Channel, Scott Brash, Michael Whitaker and Emily Moffitt will represent the UK. Ireland’s show jumping talent will be well demonstrated by Cian O’Connor, Darragh Kenny, Shane Green, Michael Duffy and Michael G Duffy. Competing for Sweden is the seasoned Olympian, Henrik Von Eckermann, the 2004 Athens Olympics team member, Malin Baryard-Johnsson, and Peder Fredricson, winner at Stockholm and individual silver medalist in Rio de Janiero, along with Evelina Tovek, who is a young talent at only 25-years-old. Alberto Zorzi and Emmanuele Gaudiano are present for Italy. Martin Fuchs, world number three, is the singular Swiss rider. Athina Onassis for Greece will also be the sole representative of her country.

The LGCT-LPEJ includes competitors from both sides of the Atlantic. Laura Kraut, Margie Goldstein-Engle, Georgina Bloomberg and Jessica Springsteen come across the pond to showcase the collective American girl-power. The Australian queen of show jumping, Edwina Tops-Alexander, will also challenge the field in Paris, as will the Qatari Bassem Mohammed. The Egyptians are aiming to defend their title won by Sameh El Dahan, and with the help of Abdel Said and Nayal Nassar’s speedy dauntless, they’re in good form to attempt a repeat of last year’s Grand Prix!
Find all the information on www.pariseiffeljumping.com