Sherwood, OR. NATIONAL CHAMPIONSHIPS are coming to DevonWood Equestrian Centre in Sherwood on September 1-3, 2017. Fifty top horses and riders from around the world will be competing for high honors at the event. Among the field are two talented teenagers, one from Oregon, who will be competing against the adults on Saturday and Sunday. 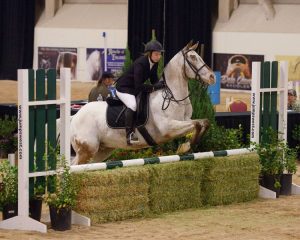 WE United, the event sponsor, is proud to announce that Morgan Wagner and her well-known blind Appaloosa horse, “Endo the Blind” will also be competing. Endo has a world-wide Facebook following of nearly 125,000! Coming back from what would have been a death sentence for many horses when illness claimed both his eyes, Endo is now one of the top competitors in the country. The hard work and determination of Endo’s owner and trainer, Morgan has brought the two to the National Championships. The team have appeared on stage and were featured at last year’s Kentucky BreyerFest, along with performing demonstrations at rodeos and horse expos both domestically and internationally.

Each horse competes one at a time, demonstrating their individual talents and giving spectators the opportunity to get to know each of the competitors in addition to enjoying the natural park-like beauty of the DevonWood estate.

The Championships are open to the public, with many opportunities to visit the riders and get to know the horses throughout the weekend. “This is a great place to learn more about many different horse breeds, even mules, and to get to know them and their owners in a friendly, welcoming environment at DevonWood!” says the organization’s President, Julie Alonzo.