Priscus Slides Past Crixus 13-12 in Gladiator Polo™ Round Four

After a one-week hiatus, Gladiator Polo™ presented by U.S. Polo Assn. returned to the Equestrian Village of Palm Beach International Equestrian Center (PBIEC), also known as “The Coliseum,” for a Friday night showdown. Fans of all ages attended the high-goal arena event that featured a prize of $24,000 for the winning team and $9,000 for the losing team. Crixus (*Santi Torres, Matias Magrini, Mike Azzaro) who played in the inaugural Gladiator Polo™ game met a restructured Priscus (Facundo Obregon, Nic Roldan, Julio Arellano) in the arena for six fast-paced five-minute chukkers of continuous play. 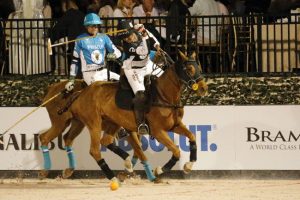 With a Roman Gladiator theme in mind, players and horses sported colorful attire. Fans could easily follow their favorite team as each horse and rider wore matching wraps, saddle pads, jerseys and helmet covers in either Black for Crixus or Teal Blue for Priscus.
The first chukker featured wide-open play with few stops. The evenly matched teams showed impressive strategy and focus, and the chukker ended with a tied score 2-2. A neckshot goal from Julio Arellano, the only goal of the second, gave Priscus a narrow lead. Third chukker play intensified, leading to more fouls. Crixus’ Matias Magrini successfully converted a penalty defended by Nic Roldan to equalize the score. Priscus answered with three combined goals from Arellano and Facundo Obregon, while also keeping Crixus from capitalizing on any shots to goal from the field. Priscus held a strong 6-3 lead at the half.
Second half competition began with Obregon and Magrini trading goals, followed up by a goal from Roldan. Crixus’ Santi Torres came alive with back-to-back field goals, including a two-point shot. Torres’ goals would mark the end of the scoring for Crixus for several minutes as Priscus scored four consecutive goals giving them a solid lead 12-8 going into the sixth. Crixus struck back in the sixth with four goals of their own to tie the score 12-all. With 45 seconds left in regulation time and a possible overtime seventh chukker on the line, Obregon scored the winning goal, sealing the win for Priscus 13-12. 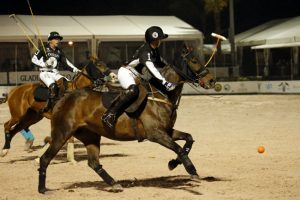 Nic Roldan was awarded MVP honors for his impressive crowd favorite shots during the game, and four goals on the day. When asked about his first experience with Gladiator Polo, Roldan replied, “It was fast, intense and really tough. Crixus was a really tough team to play. The arena footing is amazing and it was great to play with Julio.”
For more information on the tournament and the USPA visit www.uspolo.org. Tickets are now available for Gladiator Polo™ at www.gladiatorpolo.com. The next three games of the Gladiator Polo™ League are slated for March 16, March 31 with the $50,000 Gladiator Polo™ Final on Saturday, April 8. 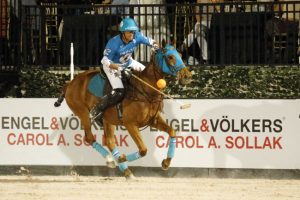 * Santi Torres is a Team USPA member. Team USPA is a USPA program designed to enhance and grow the sport of polo in the United States by identifying young, talented American players and providing mentored training and playing opportunities leading to a pool of higher rated amateur and pro players and the resultant giveback to the sport of polo.