OCALA, Florida – March 12, 2017 – With the pressure on, Todd Minikus and Babalou performed flawlessly over a demanding course to earn a spectacular win in the $100,000 Longines FEI World Cup Qualifier Presented by Golden Ocala Golf and Equestrian Club to culminate the 2017 Live Oak International.
Not only did Minikus, Loxahatchee, FL, take home the top prize money, but since Live Oak International was the last chance for show jumping riders to qualify to compete at
the Longines FEI World Cup Final, March 29-April 2, in Omaha, Nebraska, Minikus earned the right to compete in Omaha.

“We came here hoping to accomplish this and I am really happy that it worked out this way,” Minikus said. “I grew up in Iowa very near Omaha and I’ve had my eye on this ever since Omaha was awarded the World Cup.”
A field of 40 riders qualified on Friday to compete in the class, and of that starting field, 18 horse-and-rider combinations representing nine nations advanced to the jump-off.
“There were more clear rounds than I expected,” said course designer Bob Ellis.”But it made for good sport.”
Of the 18 who returned to test their skill against the clock, only five managed to post double clean rounds. Minikus was the last to qualify for the jump-off and was in position to take it all. Minikus is known for his ability to speed around a show jumping track, and he lived up to his reputation. When he and Babalou, a 12-year-old chestnut mare owned by Dr. Jack Snyder DVM and Two Swans Farm, crossed the timers to the cheers of the crowd, they had shaved almost two seconds off the time of the previous leader, Andre Thieme of Germany and his horse Conthendrix, a 13-year-old grey gelding who took second place.
“I tried to trash talk him in the schooling area,” said Thieme. “But it didn’t work. He still beat me. I am still happy to take second and win the $10,000 Leading Rider Award.”
“Today my strategy was not to turn too tight and not make a mistake by going too fast,” said Minikus. “The two times I have been here I have won, so I’m all about Live Oak. It is a great event and it turned out to be very exciting today. I have been riding this mare since she was five years old and she was just great today. I think that the grass field was a nice change from the everyday all-weather footing. My horse felt really comfortable out there.” 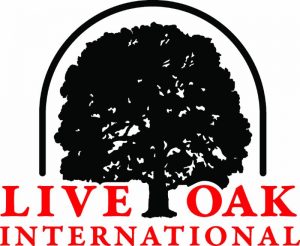