Red Horse Rescue Cultivates Support Thanks to a Hothouse Flower

When good horses get second chances it touches a chord in all animal lovers, and it was the haunting chords of traditional Celtic folk songs, performed on a 19th century George Steck parlor piano by musician and frontman Liam Ó Maonlaí of the Hothouse Flowers, that touched the hearts of supporters attending an intimate October fundraiser for Red Horse Rescue at the Amenia, New York farm of HBO and Hollywood horse trainer and actors’ riding coach, Cari Swanson. 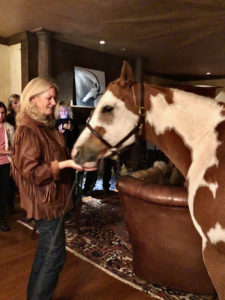 Clad in a velvet jacket and bare feet, the Dublin-born singer/songwriter who was the face of one of the most important Irish folk rock acts of the 80s and 90s, opened with an hypnotic instrumental inspired by the púca, a folkloric shapeshifter capable of either bad or good fortune.

“As a teenager, I was lucky to meet great old Irish storytellers, including my dad, who taught me songs that had come up through the land and wind and water before there was language. One of those,” Ó Maonlaí said, “was about the púca, a trickster who can change into a horse.”

There were no optical tricks as guests saw Swanson, one of the most successful horse trainers in the film industry, lead her Red Horse Rescue ambassador of good will, a chestnut Paint mare called Lily, directly through the farmhouse kitchen and into the living room to meet guests.  And who rules the world? Mares. Swanson says Lily just finished appearing in a new Beyoncé music video.

For more than 15 years Swanson has rehabilitated horses at the 63-acre Hudson Valley sanctuary: “For horses no longer able to work, we provide much-needed retirement and unconditional love until the end of their lives. Despite the challenges of this work, we find deep satisfaction in every success, big or small, and none of it is possible without donations from people like you, who care about horses as much as we do.  That is our mission. To love them, listen to them, and help them find new purposes.” Red Horse Rescue is a 501(c)3. Visit www.redhorserescue.org.