Riders Masters Cup The Birth of a Legendary Competition!

Equestrian sports are set to experience a real revolution this year with the creation of the Riders Masters Cup presented by EEM and the EEF (European Equestrian Federation). This new team competition will launch on Saturday, December 2nd and directly pit the two powers of international show jumping against one another: the United States and Europe. The first edition of the Riders Masters Cup will be held as part of the Longines Masters of Paris, and the second face-off will take place on April 28, 2018 during the Longines Masters of New York. 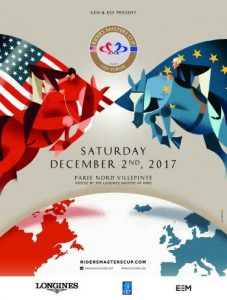 Until now, there has never been a direct competition with its own rules between these two powers of international show jumping. The Riders Masters Cup will highlight this healthy rivalry—also marked by solidarity and long-standing friendship—making the start of a great sporting saga.

Riders Masters Cup: The Birth of a Legend
Christophe Ameeuw and his team at EEM are constantly seeking innovation and are determined to bring equestrian sports to the forefront of the world stage. With this goal in mind, they have created the Riders Masters Cup in partnership with the European Equestrian Federation (EEF).

The first edition of the Riders Masters Cup will be held in the evening of Saturday, December 2, 2017, as part of the Longines Masters of Paris. The second competition will take place in

the United States, on April 28, 2018, as part of the Longines Masters of New York. This transatlantic battle will propel show jumping to the same level of popularity as tennis with the Davis Cup or sailing with the America’s Cup.

For this first edition, the composition of the teams has been entrusted to Robert Ridland for the American team and Philippe Guerdat for the European team.

The first round will see competitors vying with one another in a Table A against the clock on a Grand Prix-style course. The starting order and composition of the duels will be decided by a draw. The winning team is awarded one point for each duel won on this round.

For the second round, a Table C, each duel won is worth two points, and the team leader’s strategy is crucial in terms of the starting order of riders, substitution of horses and the choice of opponent.

With the Riders Masters Cup, EEM and EEF will proudly elevate the team spirit of equestrian sports. The audience will play a significant role supporting and following the selections, preparation and live strategy through the website ridersmasterscup.com. In the stands, each team will need the public’s support. National pride, team spirit, live strategy and audience participation will be the watchwords of this new competition. Together, we will encourage the audience at home and in the stands to #waveyourflag!

To find out everything about the Riders Masters Cup and take advantage of exclusive ticketing deals, go to the NEW website! www.ridersmaterscup.com
Official Facebook page: here
Youtube Channel: RidersMastersCup