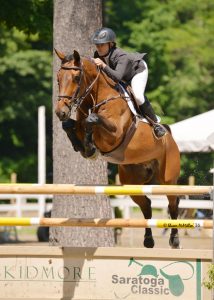 The show was inaugurated in 1927 and brought back to life in 1998, and has since become a highlight of the early summer season in Saratoga. This event is held over two weeks, Saratoga Classic I on June 14-18 and Saratoga Classic II on June 21-25, 2017. The top-level competition attracts many of the country’s best horses and riders to Saratoga Springs.

Over the past 20 years, the show has attracted more than 13,000 horses and participants from 49 states and seven countries; created employment opportunities for 850 individuals; and has raised more than $4 million for financial aid/scholarships for students of Skidmore College.
Many of the exhibitors and trainers of the competition return every year.  “It’s like a big family event, and we’re always pleased to see so many returning familiar faces each year. It’s fun to meet professional riders who had previously attended the show when they were kids,” says Adele Einhorn, Executive Director, Saratoga Classic Horse Show.
Events begin each day at 8 a.m., with the exception of Saturday, June 17 and June 24, when events begin at 7:30 am. Admission is free and open to the public.

The event will be held at the Yaddo show grounds using NYRA stabling for one more year, and will move to a new venue, Skidmore College’s White Hollow Farm in Stillwater, N.Y. in June 2018.