Annual fundraising event has been extended by one week in August 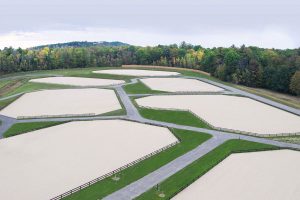 Members of the media are invited to participate in a preview tour of the facility on Tuesday, June 12, at 10 a.m.  The farm is located at 28 Brickhouse Road in Stillwater, New York. Link to directions.

The guided tour of the 103-acre property will provide a behind-the-scenes view of the new, state-of-the-art competition and schooling (practice) riding rings, horse barns, turnout paddocks, administrative offices and more.

“With this new facility, we’re investing in the future of the Saratoga Classic horse shows by creating a world-class venue that fulfills our vision and meets the needs of today’s equestrian,” said Adele Einhorn, executive director of the Skidmore College Saratoga Classic Horse Show.

“This competition venue is unlike any other in the region. The sheer size of the facility makes it attractive for riders. There’s ample room to ride and graze and turn out horses, and it’s so peaceful for both horse and rider. The new competition rings are state-of-the-art, with fully engineered drainage and all-weather, high-performance footing.”

The Saratoga Classic show began in 1927 and was brought back to life in 1998. It has since become a highlight of the early summer season in Saratoga. The top-level competition attracts many of the country’s best horses and riders to the Saratoga area. The show had previously been held at the Yaddo show grounds since 1998.

Over the past 20 years, the show has attracted more than 13,000 horses and participants from 49 states and seven countries; created employment opportunities for 850 individuals; and raised more than $4.5 million for financial aid/scholarships for students of Skidmore College.

Show organizers have added an additional week to this year’s event, which will generate more funding for student scholarships. The show is traditionally held over two weeks in June (June 13–17 and June 20–24) and will now extend to three weeks, with new dates in August (Aug.    15–18).