THE LONGINES FEI JUMPING WORLD CUP FINAL AND THE FEI DRESSAGE WORLD CUP FINAL: FIRST RIDERS QUALIFIED
In less than three months, one of the major events of the French international sports season will be taking place in the new AccorHotels Arena in Paris: the FEI Jumping and Dressage World Cup Finals. A rare event in France! Indeed, it will only be the third time in history that France will be playing host to these competitions since they were created in 1979 and 1985. The world elite in these two disciplines will be in Paris from 11th to 15th April, after a long and tough qualifying circuit.
Jumping: the elite at the AccorHotels Arena in Paris
Many riders believe that the Longines FEI World Cup Jumping is the greatest and most sporting individual circuit on the international calendar. Those present at the AccorHotels Arena in Paris will definitely represent the sporting elite. The World Cup is a universal competition, bringing together the best riders on the planet, who will previously have been qualified on their continents, through fourteen regional leagues, each comprising several legs. The Western European league is recognised as being the hardest. France’s Kevin Staut, the Olympic team medallist, (first in the provisional rankings with 65 points), will definitely be present. “I love this circuit: for me, this is what real sport is; we can surpass ourselves in these types of situations. I was seventh in my first Final, then sixth, then fifth, then third, but I haven’t progressed since then. However, each time I am qualified for the Final, I still go back there with the same motivation. There are many of us (French riders) who are trying to qualify; it’s really important to have this Final in Paris.”  But the French rider will have to contend with some major competition in Western Europe: the rider who is just behind him in the provisional rankings is none other than the European team silver medallist, Sweden’s Henrik von Eckermann; among riders already qualified in Europe, there are Germany’s Daniel Deusser (winner of the Final in Lyon, in 2014) and Christian Ahlmann (Leipzig in 2011), and the 2012 Olympic individual gold medallist, Switzerland’s Steve Guerdat (Las Vegas in 2015 and Gothenburg in 2016); the three-time winner of the FEI World Cup Final in 2003, 2006 and 2010, the living legend of show jumping, who is also a former number one, Germany’s Marcus Ehning, is almost virtually guaranteed to be qualified for the Parisian Final with 39 points and a tenth place in the provisional rankings. 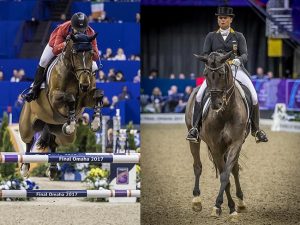 American leagues: two new talents and maybe Eric Navet
Christian Ahlmann, Daniel Deusser and Steve Guerdat will come face to face at the AccorHotels Arena in Paris with their 2017 successor in Omaha (United States), America’s McLain Ward, who is obviously in fine form: he is in second place in the US East Coast rankings (in any case he is automatically qualified, as he is the current titleholder). A league and qualified riders who will reveal new faces, since it is dominated by new young talents such as Alison Robitaille and Quebec’s Isabelle Lapierre, whereas the leading names in American show jumping such as World no.1 Kent Farrington and the Olympic team gold medallist Beezie Madden, are still not qualified. There are still two qualifying legs to come: the outcome will be revealed on 26th March. On the West Coast, where there are also two legs still to be held, the rider who was the best French representative in Omaha last year, Eric Navet, may still be able to qualify. The return of the Norman rider from California to Paris would be an event in itself. But the 1990 World champion and the legend of French show jumping is still missing about twelve points to be reunited with his public at the Final in April… However, it is still within his reach. This league is dominated by the everlasting Richard Spooner.
Dressage: will Isabell Werth succeed herself?
Three-time winner of the FEI Dressage World Cup and the titleholder, the legendary German rider Isabell Werth is capable of holding on to her title in Paris. The rider, who is automatically qualified, is bound to be the star of the AccorHotels Arena in April. She is the most titled dressage rider ever, and each of her performances is a lesson in riding. Nevertheless, competition will be particularly fierce this year with Sweden’s Patrick Kittel who has gone into first place in the European League, with the constant progression of his horse Delaunay, who was awarded a score of over 80% after his performances in Stockholm last December. The French public will probably be taken with Franco-Spanish rider Morgan Barbançon Mestre, third in the provisional rankings. In this discipline, where eighteen finalists are expected, the Fédération Française d’Equitation will also be able to award a wild card to a national rider, probably Ludovic Henry, fourteenth in the current rankings. In the three other leagues, the most serious competition will come from North America, with Canada’s Brittany Fraser and Jacqueline Brooks, but they’ll struggle to undermine the domination of Europe and in particular that of Germany, in a sport which combines performance and artistic sensitivity. The definitive list of finalists of the FEI World Cup Dressage will be revealed after the Dutch Masters, the leg in Den Bosch in the Netherlands, on 10th March.
Ticket sales are open and accessible to everyone are on offer with prices ranging from €10 for the preparatory classes, to €175 for the best seats on the days of the finals with a preferential rate for Fédération Française d’Équitation licence holders.
www.feiworldcupfinals-paris.com and www.accorhotelsarena.com