In the 2017 U.S. Open Polo Championship® Final, Valiente defeated Orchard 13-12 in an overtime thriller to capture the coveted championship trophy at the International Polo Club Palm Beach (IPC) in Wellington, Florida.
Last year’s defending champion, Orchard Hill returned to this year’s tournament final against 2015 U.S. Open Champions Valiente. Between both squads, the field saw three 10-goalers in the day’s contest. Fans were on the edge of their seat eager to witness the outcome of the most notorious rivalry of the past decade. 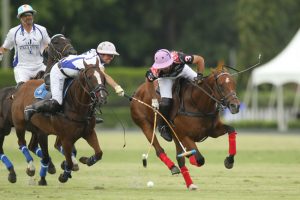 Orchard Hill scored directly out of the first bowl-in; Polito Pieres jumped on the ball, sending a neckshot towards goal which Facundo Pieres picked up as he galloped past Adolfo Cambiaso. The ball struck the left post and zoomed back into the goal mouth.
Aside from this initial goal, the remainder of the chukker would be decided by penalties; Diego Cavanagh sinking two for Valiente, Facundo Pieres scoring an undefendable penalty 4 to end the chukker 2-all. Cavanagh would continue to lead the scoring for Valiente garnering four more goals in the second and third chukkers, but it was no match for the Pieres duo who dropped the hammer contributing a combined six goals from the field. Juan Chavanne added a final score for Orchard Hill before the end of the chukker. The score 9-6 Orchard Hill held a comfortable lead at the half.
“They just did a great job on the throw ins, they beat us to the punch. Polito had some incredible breakaways as did Facundo. You never hear Adolfo say, ‘I don’t know what to do,’ it was a first. We said jokingly, ‘You can’t say that! You are the guy!’ We regrouped and everybody focused and took a man. We tried to play very disciplined and simple polo, and we started to click. You just had to go back to basics, it sounds kind of corny but it is true.” – Bob Jornayvaz
Cambiaso entered the fourth chukker with his characteristic determination, taking control of the game and scoring back-to-back goals to bring Valiente within one 9-8. Facundo and Polito Pieres countered with two for Orchard Hill to maintain the lead, but Cambiaso managed to end the chukker with yet another goal, opening the flood gates for Valiente. Valiente dominated the fifth, scoring two unanswered goals, including a backshot goal by Matias Torres Zavaleta which equalized the score 11-all. 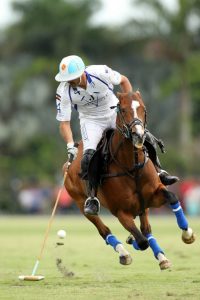 Two minutes into the sixth, Cambiaso added another goal and Valiente captured the lead for only the second time in the game. Three minutes left in play, Valiente was awarded a penalty 3, a prime opportunity to cement their lead. Cavanagh was unable to deliver however, his only penalty miss of the day. Orchard Hill stirred to action, Polito Pieres clinching a cut shot off the 60-yard line to tie the score 12-all with a little over a minute left in regulation time.

The pressure mounting, the whistle was blown against Valiente with 32 seconds left in play. After review the umpires decided on a no foul call. Orchard Hill challenged the call and won, opting to use their challenge again for ball placement. Orchard Hill was again rewarded for their tenacity with a penalty 4. Spectators were stunned as Facundo Pieres missed the game winning goal, wide and to the left. Tied as the thirty second horn sounded, overtime began with a knock-in from Valiente. Cambiaso attempted a coast-to-coast goal but was thwarted by Polito Pieres who sent a backshot to Facundo Pieres, however time ran out.
“I think Orchard Hill played really well in the first half, they won a lot of throw ins. I think we were kind of asleep. In the second half we came out strong and we did it. I think we missed a penalty 3 with three minutes to go, which put them back in the game. Luckily, Diego scored the winning goal which he deserved.” –Adolfo Cambiaso
For the second year in a row, the U.S. Open Final went into an extra chukker. After four minutes of play, two goal attempts from Polito Pieres and one from Cambiaso proved fruitless. With three minutes and thirty-four seconds left on the clock, the ball hopped over the boards near centerfield resulting in a throw-in. Thrown back into play, the ball bounced past the cluster and Cavanagh dove onto the line, breaking away from the pack. Riding Memoriosa, Cavanagh tapped the ball through the uprights to win the 2017 U.S. Open for Valiente with a final score 13-12. When asked what was running through his head as he approached the golden goal Cavanagh answered, “I was thinking I missed the forty to win the game in the last chukker and I knew this was a second chance. The ball bounced and I had a second chance. I knew I had to put it in.” 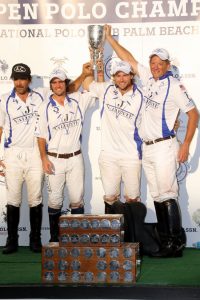 “We really focused one game at a time and that’s why we did so well this year. We never looked ahead, we never talked about the triple crown, we obviously wanted it and came prepared for it with horses and we are just lucky to be here.” – Bob Jornayvaz 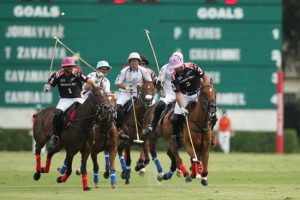 Following the conclusion of the U.S. Open trophy ceremony, the United States Polo Association presented the Hartman Best Playing Pony of the Open award to B09 owned and played by Adolfo Cambiaso, and the Seymour Knox Most Valuable Player Award to Matias Torres Zavaleta. “A clone won the Best Playing Pony of the U.S. Open, it is a dream come true,” said Cambiaso. According to Valiente groom Gloria D’Angelo, “B09 is the ninth clone of Cuartetera which is Cambiaso’s best horse in Argentina. I’ve taken care of her since last year, she is only five years old. She is going to go to Argentina and we will see how she does in Palermo.”
“We still made it to the finals and I tell you, making it to the finals, that’s worth it,” said Orchard Hill team owner Steve van Andel. When asked about rumors surrounding his exit from the polo van Andel answered, “I am not getting out of polo, but I may have ended my high-goal run. I have not made a final call on it.” An excellent sportsman and gracious opponent van Andel continued, “If you look at the last three years and what we have done, we have been right here all three years and we won one of them. We have won a couple of C.V. Whitney’s and we have had a great push over the last three years. I don’t have a complaint. Obviously everyone would like to win everything, but I have had a great time with great people, with a great team. I love spending time on and off the field with them. For me it has been a great part of life.”
Fans can relive today’s championship match by tuning in to CBS Sports, Sunday, April 30, at 2:00 p.m. EDT. The 60-minute broadcast will feature game action and interviews, as well as a recap of the entire tournament.   www.uspolo.org
###