Equestrian sports’  most prestigious annual indoor championship for jumping and dressage horses, the FEI World Cup™ Finals Omaha 2017 draws the top names in the sport from all over the globe. The FEI World Cup™ Finals Omaha 2017, the biggest event on this year’s international equestrian calendar as 70 of the world’s top riders representing 25 countries, including Olympic, World and European Champions,  compete for the coveted titles in front of 60,000 fans from all 50 states and 20 countries.

Germany’s Isabell Werth, the most decorated Dressage rider in Olympic history, headlines The “Dressage Showcase” on Friday, March 31 beginning at 3:00 pm. “Young Horses to Grand Prix with Olympic Champion Isabell Werth Presented by the Dressage Foundation”  will feature Werth and two young horses (5-7 years old), a Small Tour horse and a young Grand Prix horse. Werth will explain her training methods while bringing a young horse up the levels through to the highest level of dressage – the Grand Prix. It will be the Olympic Champion’s first-ever exhibition of this type in the U.S.

Tristan Tucker, an Australian horsemanship guru, will do “Fun Dressage,” a comedy Grand Prix and the U.S. Paralympic Team with riders from the Rio Paralympics will perform a Quadrille. There will be “Fun Freestyles” from Lynn Palm, a renowned clinician who has applied dressage principles to a variety of breeds and disciplines; Sabine Schut-Kery, a Gold medalist at the 2015 Pan American Games; Jackie Brooks, a two-time Canadian Olympic veteran; Missy Fladland, a local Small Tour competitor; and Barbara “Bebe” Davis, the highest-ranked U.S. Young Rider.

The “Dressage Natural Horsemanship Clinic”  takes place on Saturday, April 1 following the Dressage Freestyle sound check. This time Tristan Tucker will demonstrate his TRT Method of training a horse to be confident and relaxed. Lynn Palm will perform ground work with horses and Missy and Kip Fladland will demonstrate horsemanship techniques successful in both Western and English disciplines. 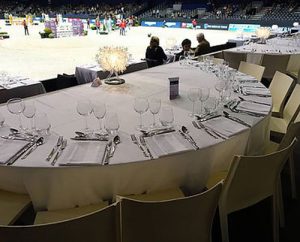 The Horse Discovery Zone Theater at the CenturyLink will host presentations of 27 domestic and international short films and documentaries from the 2016 Equus Film Festival as well as a selection of horse-related programs. Short films will be screened at the CenturyLink Wednesday through Sunday. Full length feature films will be shown at two matinees daily at the Marcus Midtown Cinema at the nearby Midtown Crossing. 1:00-5:30 p.m. Shuttle services will be provided from the CenturyLink Center Omaha.  Some film names are: Slow and Steady Wins the Race: The Story of Laura Graves and Diddy; Horse Shelter Diaries; The Four Horsemen; Unbridled; Dancing with Mustangs; Albion the Enchanted Stallion; American Cowgirl; and Hordur to name a few.

VIP Tickets in the first 5 rows are the best seats in the house and include access to the VIP Hospitality Lounge throughout the event! The VIP Hospitality Lounge will feature full meals, open bar, live music, concierge service and other amenities, all included with each VIP ticket. There are also All-Session tickets available and each all-session package includes admission to five sessions.

Hospitality Packages are also still available. The elegant Suites are spacious, comfortable and overlook the entire arena with seating for 20-25 people. Wait service, food, drink and access to the VIP Lounge are included throughout the event. Ringside tables get you up close to the action in comfort and style with In-Arena seating for 6 or 8 people, complimentary wine and heavy hors d’oeuvres along with access to the VIP Lounge throughout the event.

For more information about the FEI World Cup™ Finals Omaha 2017, hotel information and to purchase tickets, please go to www.OmahaWorldCup2017.com, charge by phone at 800-745-3000 or at the CenturyLink Center Omaha box office. Single-session tickets go on sale February 1.

Photo Credit for the Isabell Werth photo is Ken Braddick/dressage-news.com